Cyclical Trend  –   Bullish (turns bearish on a monthly close below 97.62)

Secular Trend  –  Bullish (turns bearish on a monthly close below 77.19)

Over the course of the past six months, the US Dollar has been slowly drifting lower against the Japanese Yen.  In fact, USD/JPY recorded its 2017 peak on the very first trading day of the new year on January 3rd @ 118.59.  USD/JPY has declined over 700 points in 2017.

Most likely, USD generated a short-term bottom against JPY on April 17th @ 108.31.  The past 60 days have been a period of consolidation with a slight rally in favor of USD.  However, this is not the beginning of a sustainable bullish move for USD/JPY.  Instead, the most likely scenario is a continuation of lower prices.

Based on current technical indicators, USD/JPY will have a difficult time pushing above the 113.12 level.  All rallies will find heavy resistance @ 113.12.  Therefore, the upside potential for USD/JPY is rather limited.

The long-term consensus opinion for USD/JPY is definitely bullish.  The vast majority of currency traders believe the Japanese Yen will lose ground against the US Dollar over the course of the next several years.  However, this bullish forecast will probably be proven wrong as we transition into a new long-term currency cycle.

The long-term cycles are projecting a major top in the US Dollar in 2017.  In fact, the final top may have already occurred on January 3, 2017.  Until proven wrong, it appears the path of least resistance for USD/JPY is to the downside.

Over the course of the next several months, USD/JPY will probably be locked in a trading range between 106 & 118.  This trading range could continue well into 2018.  Eventually, a breakout will occur.  Most likely, the breakout will be to the downside in favour of JPY.

The important numbers to watch are 97.62 & 125.85.  These two numbers will determine the eventual winner of the tug-of-war between the bulls & the bears.  Based on current technical studies, the eventual winner will probably be JPY (as the price eventually penetrates the 97.62 level sometime in 2018).

Please review the attached 9-month chart of USD/JPY.  As you can see from the rectangular box, the market has been drifting lower since the very first trading day of 2017.  There have been a few rally attempts.  However, each rally has been met with heavy resistance. 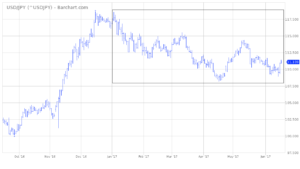 At least for now, it appears USD/JPY could be stuck in a trading range, with a slight bias to the downside.  For short-term traders, the important numbers to watch are 108.13 & 113.12.  Overall, the chart pattern is slightly bearish.  Therefore, the path of least resistance will be an eventual breakout below 108.13.

Please review the attached 15-year chart of the USD/JPY.  As you can see, over the course of the past 15 years, the market has been unable to successfully penetrate the 125 level.  This is not a good sign if you happen to be bullish USD/JPY. 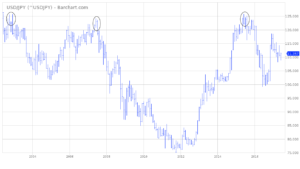 The majority of currency traders have a long-term bullish view of USD/JPY.  According to the current chart pattern, this is probably the wrong forecast.  Instead, the eventual outcome will probably be in favor of lower prices.