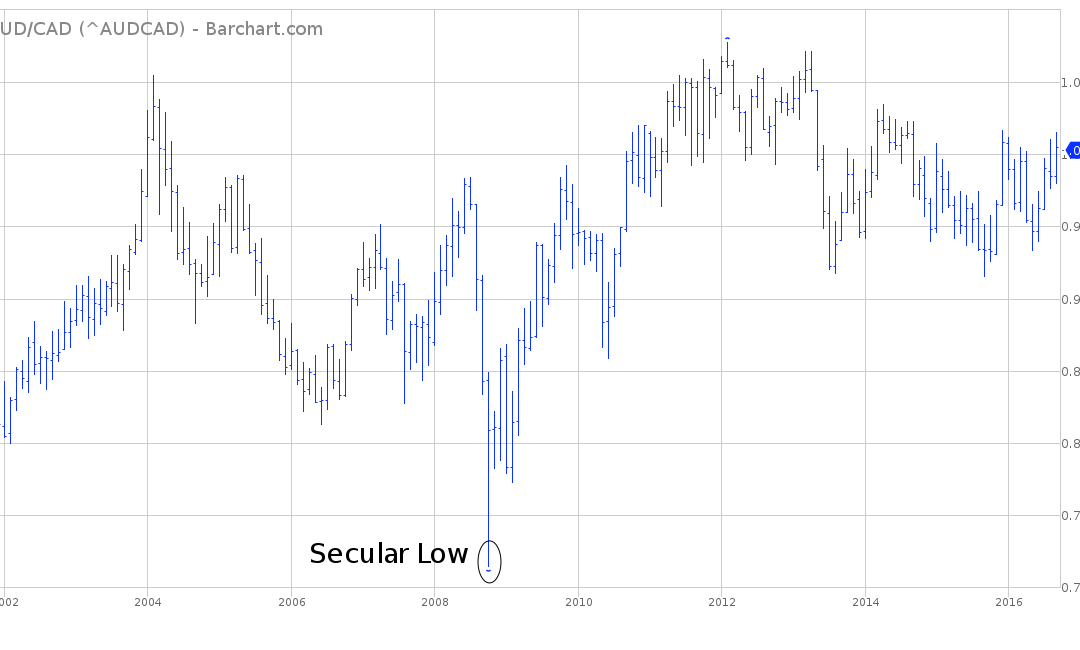 Cyclical Trend  –  Bullish  (turns bearish on a monthly close below .8583)

Historically, the exchange rate of the Aussie Dollar & Canadian Dollar have been closely tied to the value of commodity prices.  Economically speaking, both of these countries are heavily dependent on grains, metals, timber & petroleum products.  More specifically, Australia is a major exporter of wheat, iron ore & gold.  Canada is heavily involved in lumber & crude oil.

As the commodity markets have declined during the past few years, both currencies have remained under pressure against the US Dollar.  However, if we examine the exchange rate between the two currencies, the Aussie Dollar has outperformed the Canadian Dollar.

Let’s review the current outlook for AUD/CAD.  This may give us an indication of the future direction of the commodity universe.

For the most part, the short-term indicators for AUD/CAD are rather neutral.  The market has been locked in a tight trading range for the past few months.  The important numbers to watch are 1.0210 & .9947.  The bears need a daily close below .9947 in order to capture the downside momentum.  A close above 1.0210 would definitely swing the energy in favor of the bulls.

At least for now, it appears the bears have a slight advantage over the bulls.  Therefore, the most likely outcome is a close below .9947.  However, it would not be a good idea to place too much faith in this forecast.  The breakout could go either way.

Generally speaking, AUD/CAD has been slowly pushing its way higher for the past 10 years.  However, one could argue that a secular top was formed in February 2012 @ 1.0778.  This secular top can’t be confirmed until AUD/CAD produces a monthly close below .7142.

Based on the current reading of the long-term indicators, AUD will outperform CAD over the course of the next few years (possibly longer).  Therefore, it’s highly unlikely AUD/CAD will generate a monthly close below .7142.

Fundamentally speaking, the Australian economy is currently in better shape versus the Canadian economy.  Therefore, interest rates & inflation in Australia will continue to move higher in comparison to Canada.  Without question, the two driving forces for any currency are future expectations of interest rates & inflation.  Based on these factors, AUD has a clear advantage over CAD.

Please review the attached 6-month chart of AUD/CAD.  The market has been locked in a tight trading range for the past six weeks (horizontal lines).  The bulls need a close above 1.0210 in order to capture the upside momentum.  Conversely, a close below .9947 will push the momentum in favour of the bears. 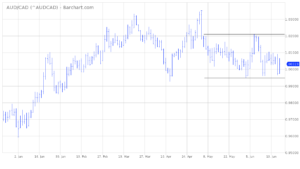 Based on the current short-term chart patterns, the most likely outcome is a daily close below .9947.  Therefore, AUD/CAD should turn bearish over the course of the next few weeks.  However, the bears will probably be unable to push the market too far below .9947.

Please review the attached 15-year chart of AUD/CAD.  Based on the long-term chart pattern, AUD/CAD made a secular bear market low in October 2008 @ .7142.  Generally speaking, the market has been drifting higher for the past nine years.  However, it does appear AUD/CAD has been trapped in a sideways trading range since 2013.  Nevertheless, the long-term trend is still bullish. 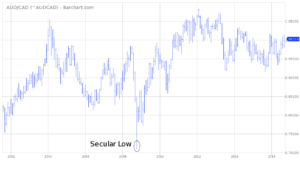 As we review the long-term chart pattern & technical indicators, the most likely scenario for AUD/CAD is higher prices.  It certainly appear this market wants to move higher over the course of the next few years (and possibly much longer).

A monthly close above 1.0448 could send AUD/CAD much higher as we  move into the final few years of this decade.  The bears need a monthly close below .8875 in order to push the chart pattern in their favor.  Possible but not likely.