Cyclical Trend Bearish (turns bullish on a monthly close above 1.1985)

Secular Trend Bearish (turns bullish on a monthly close above 1.4925)

The Euro generated a very bullish breakout on April 24th, following the French election results. This breakout is still very much intact. However, it does appear the market could be running out of momentum.

The short-term picture will continue to remain bullish as long as the Euro stays above 1.1077. Two consecutive daily closes below 1.1077 would push the market into bearish territory. 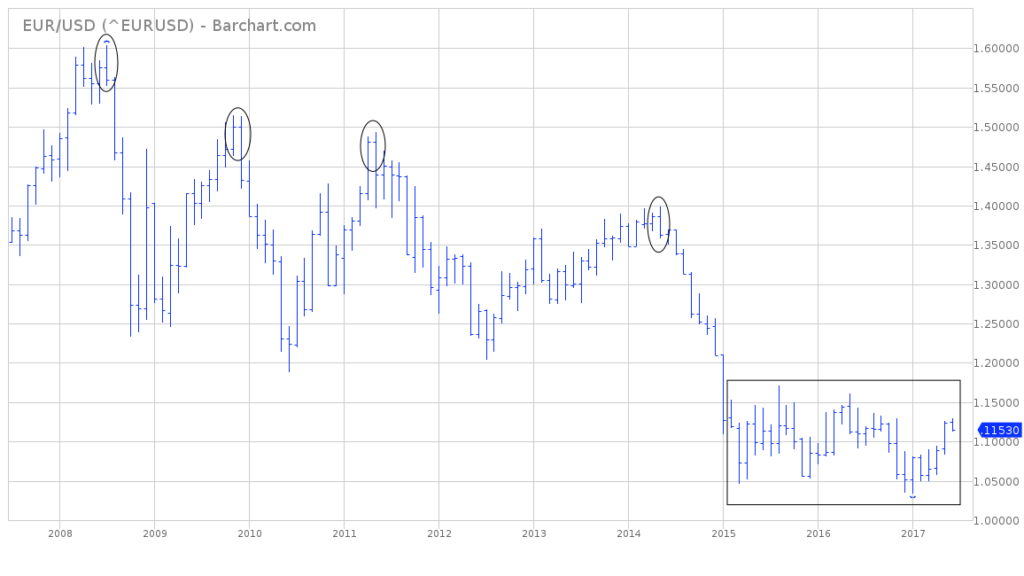 Without question, the long-term view of the Euro remains decidedly bearish. Basically, the market has been drifting lower for the past nine years. Of course, there have been several rallies along the way. However, each rally has been followed by lower prices, which is a classic definition of a bear market.

Based on the price action in the Euro over the course of the past six months, it certainly appears the market may have formed an important bottom in January @ 1.0340. It’s much too early to determine if the January low marked the beginning of a new multi-year bull market for the Euro. We would need to see several more months of trading activity in order to draw any conclusions on whether or not January was a long-term bottom for the Euro.

Please review the attached 6-month chart of the Euro. As you can see from the rectangular box, the market produced a very bullish “breakaway gap” on April 24th. This bullish gap has been in place for 37 consecutive trading days. Without question, this is a very bullish chart pattern for the Euro.

Based on historical research, over 80% of all gaps are eventually filled. In fact, most gaps are filled within the first few days. However, those gaps which are not filled are often the “launching pad” for a long-term sustainable move. As long as the Euro stays above 1.0737, the gap will remain firmly in place. Over time, the Euro has the potential to move dramatically higher as long as the gap is not filled. 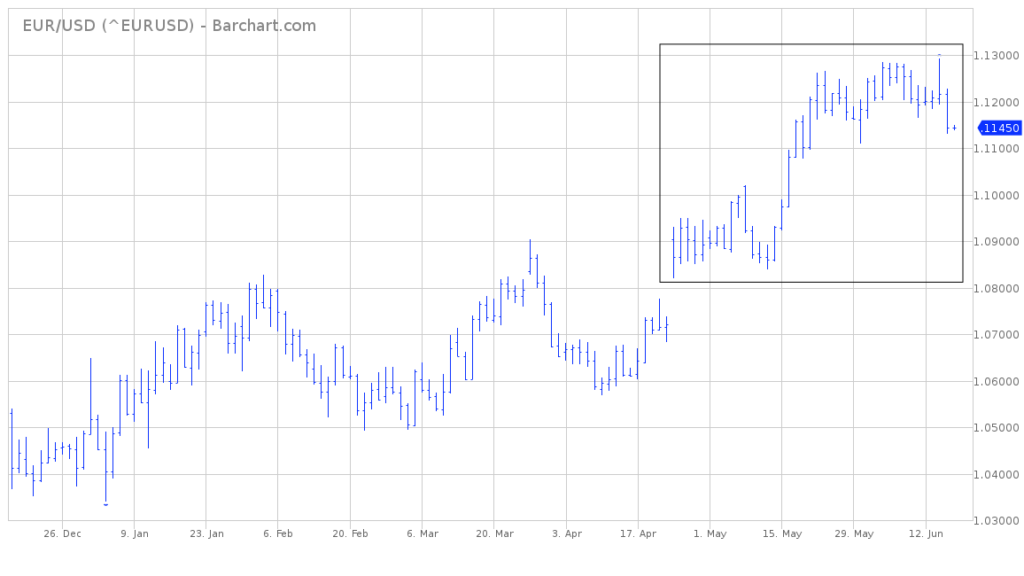 Please review the attached 10-year chart of the Euro. As you can see, the Euro has been generating lower highs & lower lows since 2008. This is a classic definition of a long-term bear market. However, this pattern could be coming to an end for the Euro.

Please notice the rectangular box near the bottom of the chart. The Euro has been stuck in an incredibly tight trading range for the past 2 ½ years. This is very uncommon for a major currency to be locked in a trading range for such an extended period of time.

When the Euro finally breaks out of this 2 ½ year period of consolidation, the breakout will most likely be extremely powerful. The important numbers to watch are 1.0340 & 1.1710. Eventually, this tight trading range will come to an end & the Euro will experience a substantial move.

Currently, the market is hovering right in the middle of the range. Therefore, the breakout could occur in either direction. Based on the current long-term chart pattern, the breakout will be to the downside.