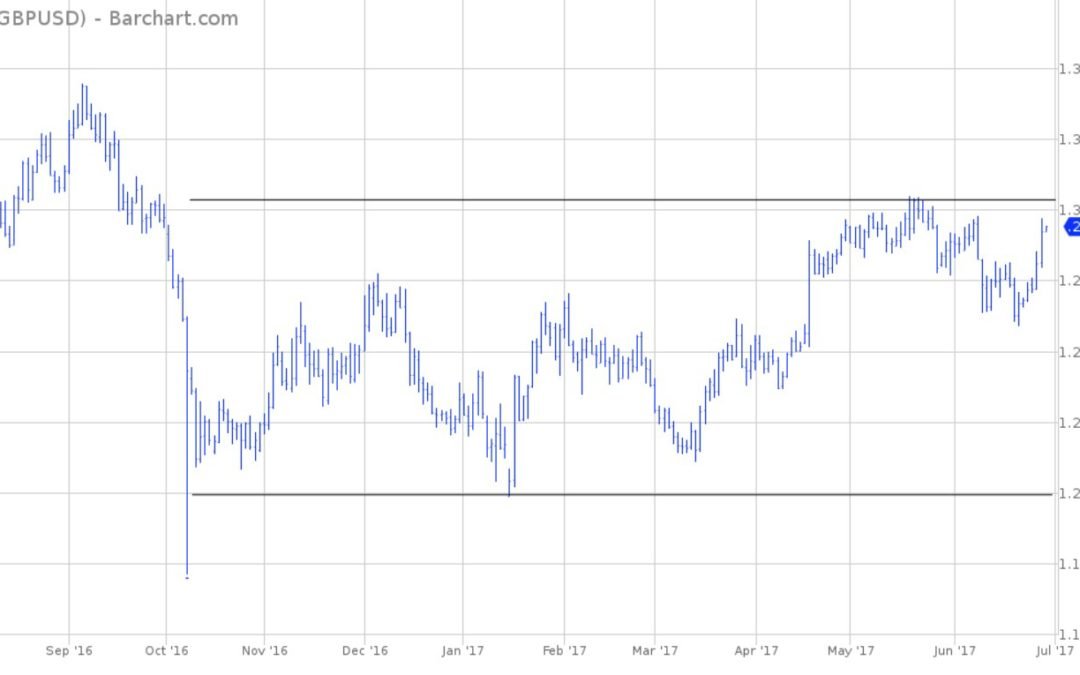 Cyclical Trend  –  Bearish (turns bullish on a monthly close above 1.5015)

Despite the strong advance on June 28th, the short-term indicators remain neutral to slightly bearish.  The recent strength in GBP/USD appears to be a countertrend rally in a bear market.  However, this forecast will be wrong if the market generates two consecutive daily closes above 1.3047.  A push above 1.3047 will definitely shift the short-term view from bearish to bullish.

Although GBP/USD could certainly penetrate the 1.3047 level, the most likely outcome will be a gradual rollover to the downside.  The next area of support is 1.2706 (followed by 1.2635).

Going forward, all short-term rallies will probably be met with heavy resistance.  It will be rather difficult for GBP/USD to push above the May 18th high @ 1.3047.

Based on a long-term view of GBP/USD, it’s rather difficult to build a bullish argument in favor of the British Pound.  It appears that 2017 has marked the early stages of a new long-term currency cycle.  Generally speaking, this new currency cycle will be bearish for the US Dollar.

However, the British Pound could be one of the few major currencies that actually continues to decline against the US Dollar (despite the new currency cycle).

Brexit negotiations could easily continue well into 2019.  Consequently, there will be a cloud hanging over the head of the British Pound for the next two years.  Most likely, GBP will be unable to gather any type of sustainable momentum in favor of the bulls until there is better clarity on Brexit.

Please review the attached 12-month chart of GBP/USD.  As you can see from the horizontal lines, the market has been locked in a 10-cent trading range for the past eight months (between 1.20 & 1.30).  This market is simply consolidating the dramatic move it experienced immediately following the Brexit vote in June 2016.  It’s not uncommon for currencies to trade sideways for several months following a very large move. 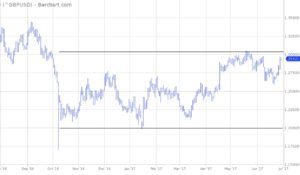 Based on the current chart pattern, this 8-month trading range in GBP/USD will eventually be resolved to the downside.  The British Pound made several attempts to break above the 1.30 level in April & May.  However, each attempt was unsuccessful.  Therefore, the past of least resistance appears to be to the downside.

Please review the attached 10-year chart of the GBP/USD.  As you can see, the market has been drifting lower for the past ten years.  Based on the current downtrend line, GBP/USD would have to generate a rally above 1.5330 in order to turn bullish on a long-term basis.  This seems highly unlikely.  Instead, the most likely scenario is a penetration below the October 2016 low @ 1.1710. 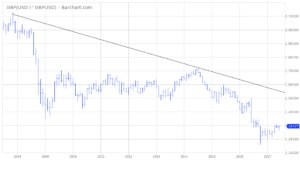 Based on the current long-term chart pattern, there’s no reason to expect the GBP/USD bear market to end any time soon.  Over the course of the next few years, the British Pound is probably on its way to parity versus the US Dollar ($1.00 per British Pound).