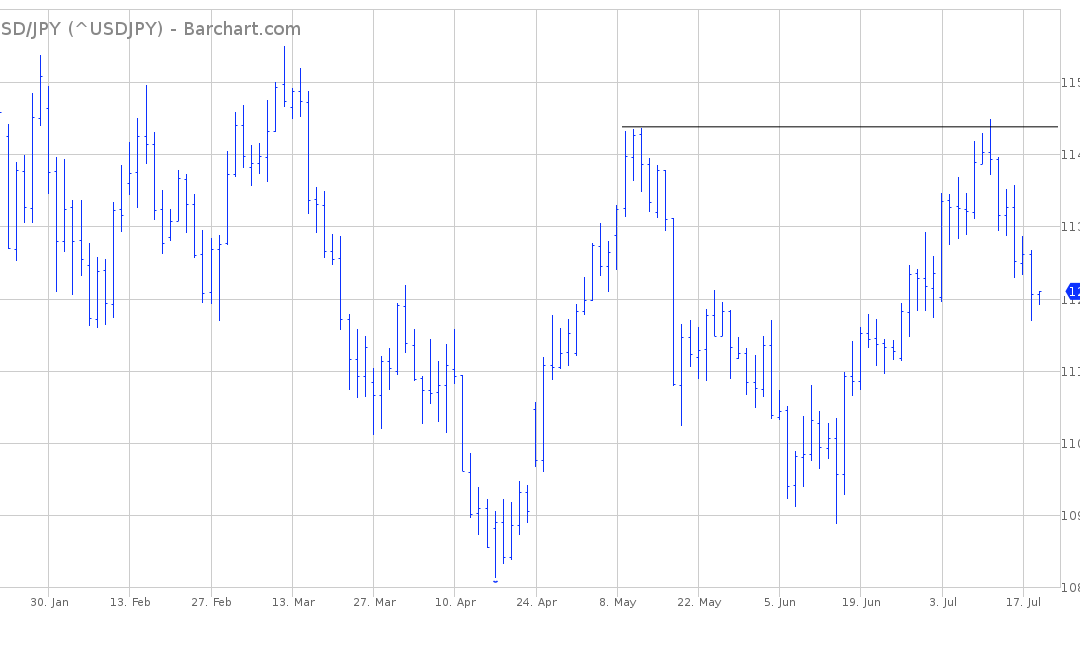 Cyclical Trend  –  Bullish (turns bearish on a monthly close below 97.62)

Secular Trend  –  Bullish (turns bearish on a monthly close below 77.19)

The recent short-term price action in USD/JPY has been slightly bearish.  The market has dropped approximately 240 points during the past five trading sessions.  Going forward, this

is probably not the beginning of a sustainable move for USD/JPY.  Instead, the most likely scenario is a trading range (with a slight bias to the downside).

During the past several trading sessions, the bulls have been unable to generate a daily close above 114.37.  At least on a short-term basis, this is a bearish signal for the US Dollar.  The short-term momentum could turn decidedly bearish on a close below 110.94.

For the past several years, the vast majority of currency analysts & hedge fund traders have been forecasting a complete collapse of the Japanese Yen against the US Dollar.  This forecast is based on the assumption that Japan’s debt-to-GDP ratio is unsustainable.

Without question, Japan’s debt-to-GDP ratio is incredibly large.  In fact, Japan has (by far) the largest debt-to-GDP ratio of any major country in the world.  The current reading stands at 250.4%, which is well above the United States at 106.1%.

Japanese national debt has been steadily rising for the past two decades.  If the country’s national debt is so high, why has Japan’s currency remained relatively stable?  How is Japan able to maintain such an enormous debt-to-GDP ratio while simultaneously preserving a durable currency?

The answer is quite simple. Japanese citizens have an incredible ability to save money.  Japan’s national savings rate is the highest among any of the G20 nations.  Therefore, this allows the Japanese government to issue enormous amounts of government bonds in order to finance its national debt.  The citizens of Japan use their savings to purchase the bonds.

As long as the country continues to uphold its high savings rate, the financial markets will allow the Japanese government to carry a high debt-to-GDP ratio by continuing to purchase the Yen.

Consequently, those currency experts who continue to predict a collapse of the Japanese Yen will be proven wrong.

Over the course of the next several months, USD/JPY will probably be locked in a trading range between 106 & 118.  This trading range could continue well into 2018.  Eventually, a breakout will occur.  Most likely, the breakout will be to the downside in favor of JPY.

The important numbers to watch are 97.62 & 125.85.  These two numbers will determine the eventual winner of the tug-of-war between the bulls & the bears.  Based on current technical studies, the eventual winner will probably be JPY (as the price eventually penetrates the 97.62 level sometime in 2018).

Please review the attached 6-month chart of USD/JPY.  As you can see, the bulls were unable to produce a daily close above 114.37.  Consequently, the chart has produced a double top.  This could mark the beginning of a sustainable move to the downside.  Quite often, double tops can turn rather bearish in a short period of time.  The important number to watch is 110.94.  A daily close below 110.94 could push USD/JPY much lower rather quickly. 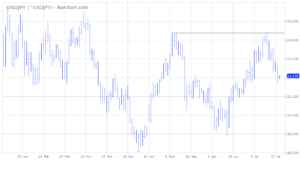 Please review the attached 15-year chart of the USD/JPY.  As you can see, over the course of the past 15 years, the market has been unable to successfully penetrate the 125 level.  This is not a good sign if you happen to be bullish USD/JPY.

The majority of currency traders have a long-term bullish view of USD/JPY.  According to the current chart pattern, this is probably the wrong forecast.  Instead, the eventual outcome will probably be in favor of lower prices.