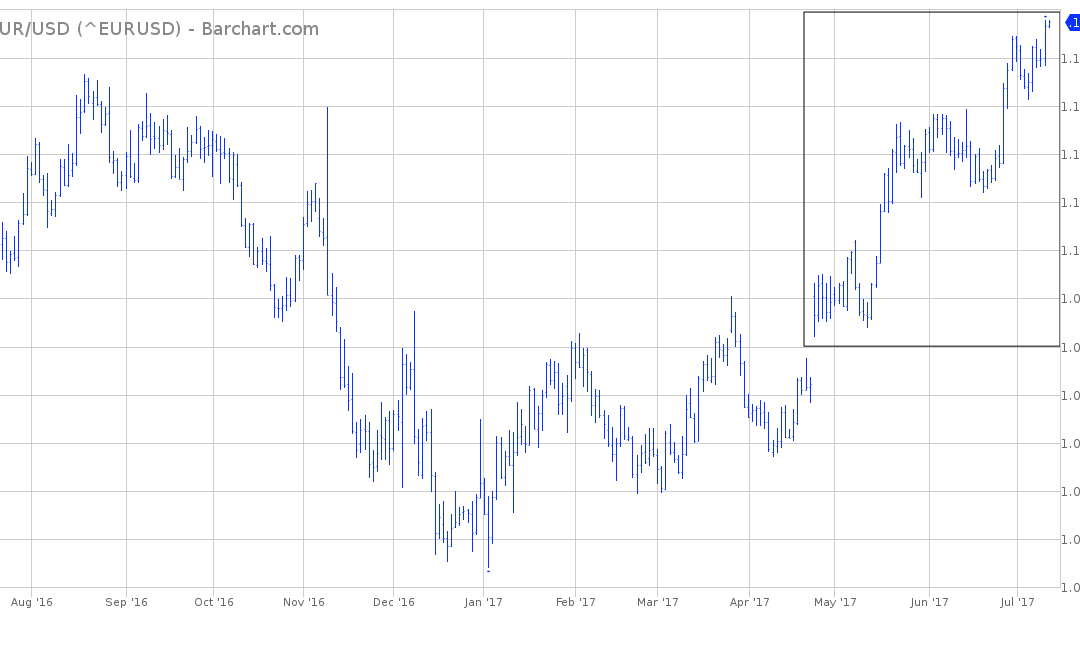 Cyclical Trend  –  Bearish (turns bullish on a monthly close above 1.1985)

Without question, the Euro is the strongest currency within the FX community.  EUR/USD generated another bullish breakout on July 11th.  The market is trading near its highest level in 14 months.  The bulls are firmly in control of this market.  The next short-term resistance level is 1.1529.  A daily close above 1.1529 opens the door to 1.1616.  The bears need a close below 1.1294 in order to recapture the downside momentum.

As we discussed during our previous EUR/USD report, FX traders were overwhelmingly bearish on the Euro heading into the new year.  Traders were convinced the US Federal Reserve would lead all other major central banks toward a tighter monetary policy.  At the same time, the consensus view for the European Central Bank (ECB) was for a very dovish policy.

As 2017 unfolded, it slowly became apparent that the growth rate of the EU economy was exceeding analysts’ expectations.  Consequently, interest rate expectations & inflation forecasts were revised upward.  EUR/USD began to gather momentum in April & May.  Specifically, April 24th was a major turning point for the Euro (following the French presidential election).  The Euro has been steadily pushing its way higher since the 24th day of April.

Based on the short-term indicators, this bullish trend will continue.  There’s no evidence to suggest the bears will recapture the downside momentum.

Despite the recent strength of EUR/USD, the long-term view continues to remain bearish.  This market has been drifting lower for a number years.  Based on the long-term indicators, there’s no reason to believe EUR/USD will generate a sustainable bullish breakout any time in the near future.

Based on the price action in the Euro over the course of the past six months, it certainly appears the market may have formed an important bottom in January @ 1.0340.  It’s much too early to determine if the January low marked the beginning of a new multi-year bull market.   We would need to see several more months of trading activity in order to draw any conclusions on whether or not January was a long-term bottom for EUR/USD.  At least for now, the long-term view is still decidedly bearish.

Please review the attached 6-month chart of the Euro.  As you can see from the rectangular box, the market produced a very bullish “breakaway gap” on April 24th.  This bullish gap has been in place for over ten weeks.  This is a perfect example of why breakaway gaps are the most profitable chart patterns. 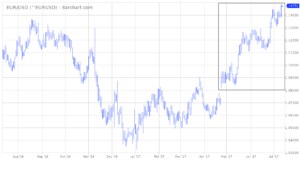 The short-term chart continues to remain bullish as long as EUR/USD stays above 1.1294.

Given the recent number of bullish breakouts, it appears rather unlikely the market will penetrate 1.1294 any time in the near future.

Please review the attached 10-year chart of the Euro.  As you can see, EUR/USD has been drifting lower since July 2008.  Based on the downward sloping trend line, the Euro needs to generate a monthly close above 1.2840 in order to turn bullish on a long-term basis.  It’s highly unlikely EUR/USD will break above 1.2840 any time within the next several months.  Therefore, the long-term chart pattern will continue to remain bearish. 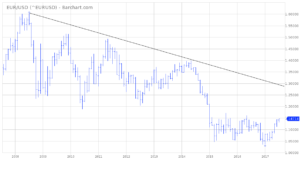